I thought that after I gave my first talk, it would be easy to come up with ideas. Turns out, not the case. There are exercises to get around that, usually something like writing down:

and so on. The danger with me doing this is if I still can’t come up with any ideas, I start to think:

Basically the speech pattern of my jerk brain goes something like this:

SUCH A DANGEROUS THOUGHT SPIRAL. And also mathematically false.

What works best for me is asking friends for help by asking them this question: “If you could outsource your technical learning, what would be something you’d want to learn?”

This is so successful for me that my last two talks topics came from friends (shout out to @jaronmoore for vtables and @nerdonica for type erasure!). Then at the very least, I know I have an audience of one who will be interested in listening to my talk.

I always start with a transcript. Then when I get stuck on my transcript, I work on my slides and vice versa until I have a completed rough draft. This part is THE SLOG.

There’s no outsourcing trick for this, it’s really just a matter of showing up to work. I find that idea reassuring, that me finishing the rough draft of the talk is directly proportional to the amount of time into it. So even if I’m tired after a day of work, if I just show up for fifteen minutes when I get home, that’s usually enough to make some progress and be that much closer to the end of THE SLOG.

But there’s diminishing returns, and it’s not like if I put twenty straight hours into prep I’d have a rough draft done in one sprint. I’ve learned to recognize that it’s time for me to stop working on the talk once my jerk brain creeps into the room with thoughts like:

It’s amazing how after a night of sleep, those thoughts disappear and the obstacles I had the night before are suddenly very easy to solve.

By the time I’ve finished a rough draft of transcript and slides, I’m usually so tired of thinking about the topic that the thought of practicing dry runs by myself sounds incredibly tedious. I’ve already sunk so much time into this talk, I just want it to be over, and only want to do high-leverage tasks that will get me the most amount of prep in the least amount of time possible.

So I schedule dry runs with friends. I don’t even practice beforehand, I just stumble my way through and if I get completely lost, I just cheat with my transcript.

This is helpful because:

Usually by the third dry run with a friend, I’m pretty solid on the talk 💪 and anything after that is diminishing returns. I find that because writing up the transcript was such an investment, I have enough of my talk memorized to improvise my way through and that the dry runs is just the last 20% that makes me feel ready.

But if that’s not enough, if you’re like me and like to extract every ounce of productivity from every passive second, one very reassuring practice is recording the audio of a dry run and playing it during commutes and before going to sleep. For bonus points, pause the recording at different points and try to guess the next sentence.

Right before the talk

I use lots of little rituals the hour before I give my talk:

I somewhat jokingly told a friend to use Formation as her power pose song and to write the word SLAY over and over. To my utter delight, this beauty came out of it: 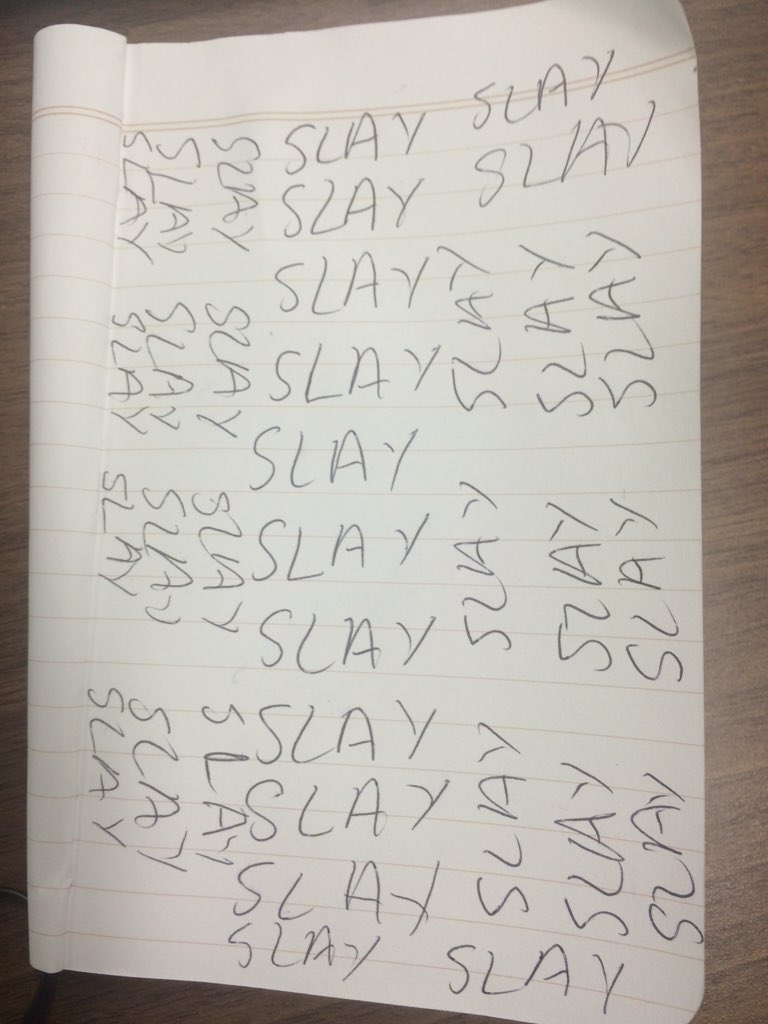 I like to pause for a moment once I get up to the podium and take a deep breath as I get a sense of the room. The silence and stillness usually gets people’s attention.

And then I crush it.